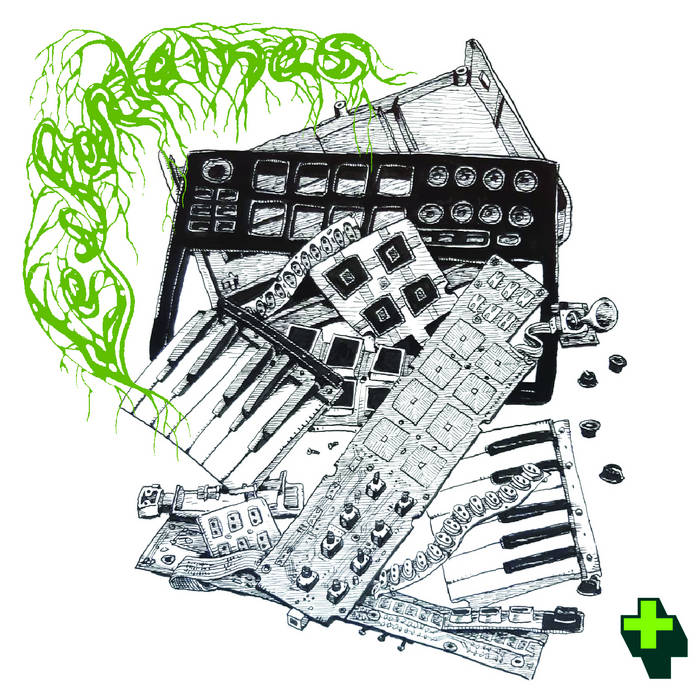 LES FONTAINES are a Toronto “éléctro-psyche” synth pop duo. Their second 9 track album  Rêve Noire is out now on Toronto’s paper+sound label, available as a download.

Lorenz Peter (synths, noise, turntables) has played in numerous other duos, including  CORPUSSE, OFFWORLD and in bass synth duo PROCESSOR.

This new album by Les Fontaines was recorded in several stages and various studios, including a sauna cabin in the great Canadian wilderness.

The Unlearn is something entirely else. Recorded in a single take, this is Les Fontaines at their  melodic, electro-pop finest. Vacances En Plastique is a full on, electronic synth punk stonker. When Suicide went to the French Riviera Discothèque?

Awake? Asleep? Sixxi is the sound of somewhere in between. Face to floor and barely hanging on. Ruff synthesizers growl over unidentified washes of sound.

A cocktail mixologist’s dream, Substance Abuse is one part shrieks from the animal kingdom, mixed with three parts of exotica, psychedelia and electronic lounge music. Tervist!

Les Fontaines’ album ends on a similar note to how it began. Le Fin Du Film is the ideal music for any film’s end credits. The band members can’t exactly remember recording this track, other than fuzzy thoughts of being strewn out on the floor, surrounded by their instruments and their vices. Maybe it was all a dark dream?

Drawings by Lorenz.
Design by Heiki.

Bandcamp Daily  your guide to the world of Bandcamp

MF DOOM is given his flowers, plus appearances from MC Jada Imani and Stanley Ipkuss